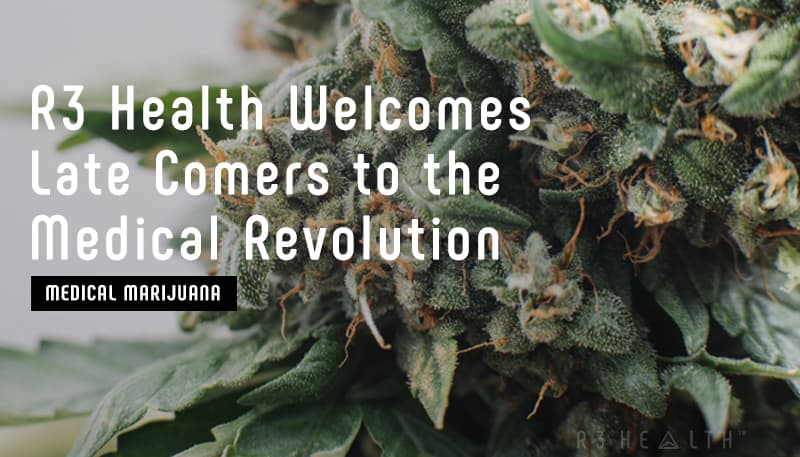 It appears that mainstream medicine is finally catching up with a form of therapy we at R3 Health have been advocating for years.
In a recent open letter to U.S. Attorney General Jeff Sessions, famed neurosurgeon and CNN’s resident medical reporter Dr. Sanjay Gupta shared the results of a five-year-long investigation into the medical benefits of the cannabis plant. His conclusion? “Not only can cannabis work for a variety of conditions such as epilepsy, multiple sclerosis, and pain, sometimes, it is the only thing that works.”
As part of an appeal for the legalization of medical cannabis, Dr. Gupta goes on to tout cannabis as a potential solution for the opioid epidemic plaguing our country. Citing research from the Rand Corporation, supported by the National Institute on Drug Abuse, Dr. Gupta points out that there has been a 20 percent decline in opioid overdose deaths between 1999 and 2010 in states where medical marijuana has been legalized. In fact, data suggests that medical cannabis could save up to 10,000 lives every year.
That’s because the compounds found in cannabis can effectively treat pain, reducing the need for opioids. In addition, it is effective at easing opioid withdrawal symptoms, similar to its effect on cancer patients who are ill from chemotherapy side effects.  That also makes it easier for addicts to break the cycle of dependency.
The specific part of the cannabis plant that has therapeutic value is Cannibidiol (CBD), which doesn’t get you high, but does hold the key to the wide variety of medicinal effects that marijuana offers. The two main sources of CBD are hemp and marijuana, but CBD derived from the latter is the most potent and effective.
In 2012, the British Epilepsy Association published a study that strongly supported CBD as “a therapeutic candidate for a diverse range of human epilepsies.”  As such, it can be used to treat neurological diseases such as Alzheimer’s, multiple sclerosis, and Parkinson’s disease.
CBD also has anti-inflammatory properties. In a 2015 study, researchers compared its powerful, pain-relieving effects to that of morphine.
That same year, a pre-clinical trial found that CBD has a formidable anti-tumor effect, slowing “the progression of many types of cancer, including breast, lung, prostate and colon cancer” by making it harder for cancer cells to grow, thus causing the cells to die in some cases.
Meanwhile, a study in 2013 found that medical cannabis improved people’s ability to forget traumatic memories, making it a viable treatment for the millions of Americans suffering from Post-Traumatic Stress Disorder (PTSD) or other anxiety disorders.
While more and more medical experts are belatedly hopping aboard the medical marijuana bandwagon, we at R3 Health in West Palm Beach, Florida, have known about the therapeutic viability of CBD and have advocated its use for some time now.
That’s because our focus has always been – and always will be – on combining traditional and alternative therapies into a successful integrative approach to health care and wellness for our patients.
Come in to our office and learn more about this magical therapy that mainstream medicine has finally started to recognize but we have been using for years.

Our team is ready to help you with any questions!

By submitting I agree to be contacted

Made With ❤ From Us, For You

Page load link
We use cookies on our website to give you the most relevant experience by remembering your preferences and repeat visits. By clicking “Accept All”, you consent to the use of ALL the cookies. However, you may visit "Cookie Settings" to provide a controlled consent.
Cookie SettingsAccept All
Manage consent

This website uses cookies to improve your experience while you navigate through the website. Out of these, the cookies that are categorized as necessary are stored on your browser as they are essential for the working of basic functionalities of the website. We also use third-party cookies that help us analyze and understand how you use this website. These cookies will be stored in your browser only with your consent. You also have the option to opt-out of these cookies. But opting out of some of these cookies may affect your browsing experience.
Necessary Always Enabled
Necessary cookies are absolutely essential for the website to function properly. These cookies ensure basic functionalities and security features of the website, anonymously.
Functional
Functional cookies help to perform certain functionalities like sharing the content of the website on social media platforms, collect feedbacks, and other third-party features.
Performance
Performance cookies are used to understand and analyze the key performance indexes of the website which helps in delivering a better user experience for the visitors.
Analytics
Analytical cookies are used to understand how visitors interact with the website. These cookies help provide information on metrics the number of visitors, bounce rate, traffic source, etc.
Advertisement
Advertisement cookies are used to provide visitors with relevant ads and marketing campaigns. These cookies track visitors across websites and collect information to provide customized ads.
Others
Other uncategorized cookies are those that are being analyzed and have not been classified into a category as yet.
SAVE & ACCEPT
Go to Top